Continue to use version 16

I upgraged my version on x5 professional to version 17.

I can see the logic in the one program that keeps updating as I have many other versions on my PC.

Most of my sites are still happily using V13.

I am worried though about the many problems reported with V17. I have some still at V16 in the Projects folder that I haven't had to work on and thus update to V17. I am scared of things then not working when I open them and they convert to V17.

Is it possible to Run V16 still as a seperate program?

Yes it's possible to have 17 and 16 parallel. When you have upgraded to 17 just download the 16 from your profile here and install it. It will install in a different folder. Don't use a 16 downloaded before because there is an unversioned change in the 16 for installing in a different folder!

As far as I know, the project folder will be the same. So make sure you have iwzip as backups.

Or copy the projects to a different folder and locate it in the settings.

as the other users suggested, WebSite X5 17 will be installed on WebSite X5 16, still, you will be able to download v16 from the "Download" section of your Help Center account and install it separately, so you will have two folders, one for v16 and one for v17. Before opening an existing project with v17, don't forget to duplicate it, so you will have a backup copy suitable for v16, too.

Please let me know if I can be of further help. Kind regards.

Will the version of 16 I download keep wanting to upgrade to V17?

All the lower verisions put the version number in the Folder name.

I will have to redo my V17 sites in V16 as I have found out they don't work on older Macs or iPads of which there are many. So I cannot continue to use V17.

Many hours of work for me to do!

Will the version of 16 I download keep wanting to upgrade to V17? YES - just ignore it

Yes you can have separate folders, I am not a fan of the single folder, multiple versions even though WX5 does allow copying of projects and correctly tags the version you're opening.

Download a fresh copy of v16 from your profile (it may have been modified since your last download), install it, open WX5 and set your preferred folder (I would do it for v17 as well) 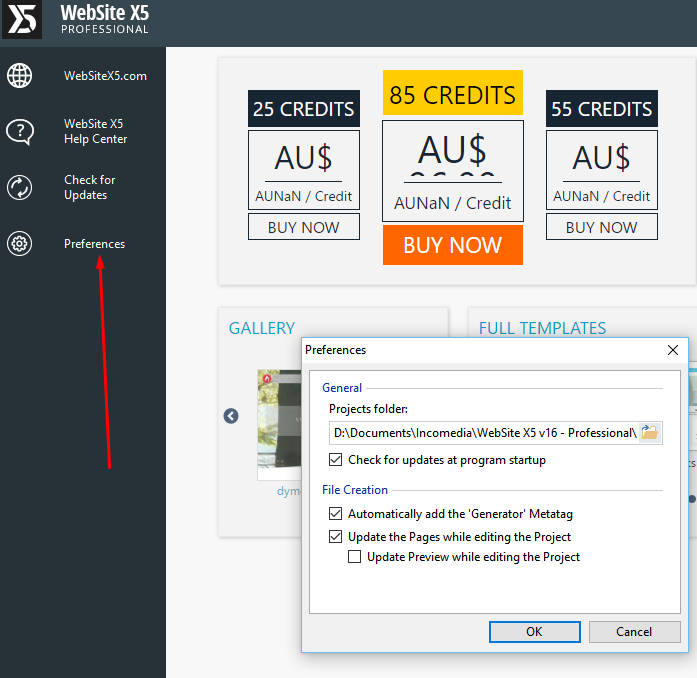 If you accepted the defaults when you ran v17 and opened an existing project, you will have a copy of each project that is still v16 in the existing wx5-professional folder, this whole project folder could be copied to the new v16 location.

As for compatibility with unsupported ipads, iphones and macs, this post may be of interest https://helpcenter.websitex5.com/pl/post/203661

You never know, they may even work out how to make it backward compatible in the process :-)

Please do not rely on save and backup when recreating your projects, step 5 export, export project to create an iwzip is a robust backup and perfect for when you again wish to move forward and just like in v17 you can name each iwzip perhaps incrementally or with the date so you have multiple fallbacks.