How to set page length...

Just getting started with X5, and it appears I'm going to have a lot of questions.

At this point, I've just spent the last hour trying to figure out how to set the page length.  I think I've checked all settings, but could have missed it.  I also tried adding rows to see it that would extend the page length, but it just kept resizing the rows to fit the current page length.

Does anyone know how to set the page length, and can it be set for individual pages?  As always, appreciate any help or direction.

And on a side note, is it possible to set the size of individual cells? 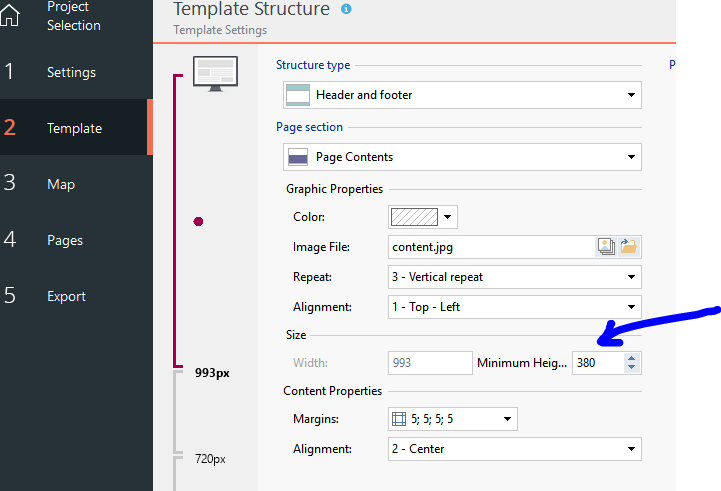 Hi Esahc, thanks for the reply.

I did find that option and set it, which helped me keep going.  When I first tried adding rows to stretch the page, I didn't realize there was a difference between an empty cell and one with content concerning stretching the page.  Just figured a cell was a cell.

Going to take me a while to get into the work flow with X5.  I started using builders (rather than full hand coding) when they first came out, and have used most of them at one time or another over the years.  And I've gotten used to things like being able to set page properties (length, background, colors, etc.) while working directly with the page with just a right-click.

It was the same with text link colors, I finally figured out I had to go back to Step 1 to change those.

I'm also just now getting used to the idea of using cell margins (inner and outer) to place things where I want them on the page rather than just dragging them to a location on the page.

It's coming along, though, and I'm finding more out as I work with it.  I started by attempting to recreate a very simple 3 page site I had made for the wife last year to test out the program.  I finally have the first page done, but next I get to work with the program's forms and a few other options, so I may still be back with more questions.  And it will be interesting to see how the 'responsive' part of the program works, I'm sure it will be different than I'm used to.

Anyway, just a learning curve for an old developer set in his ways, I reckon.  Thanks again for the reply, and maybe one of these days I'll be able to help answer questions here...

Terry - I am sure you will be offering advise in no time. Don't hesitate to ask if there is something you want to achieve but can't work out how :-)

Thanks again, Esahc, appreciate it.  I am still having problems accomplishing certain things.  As I mentioned earlier, I'm trying to recreate a very simple 3 page site to learn the basics.

Right now I'm having problems with the responsive variants.  I've been modifying the cells in the individual variants trying to get them to display correctly on mobile devices, but suddenly I can't get to the page variants.  In the Pages section, I had been able to click on the variant size on the left, but that option is no longer there.  It is still there under the "Responsive settings" section, but not under the "Page Creation" area where it had been.  I don't know how to get that back, and need to be able to switch between variants in that section.

And you can see what i've been trying to do in X5 at:

I can't make it look like the original, but most of it is close enough.

If you look at the X5 site on a phone, you can see that I'm having a problem with header text, and an email address on the Contact page.  And sometimes it duplicates footer text on the phone (sometimes not).  I've tried 3 different phones and browsers.  Also, the mobile menu doesn't seem to work on the phones, though it does when testing the mobile version in the preview browser.

For the last year, I've been using a couple other responsive web builders (won't mention names) that have been relatively easy to work with, but each has a few issues.  That's why I purchased and am trying X5.  I'm starting to like basics of X5, but have to figure out how to do some things and set various cell contents to display better on mobile devices.

And I need to get back the option on the left to change variants in the page creation area.  See attachment...

You don't have it there on a page, because it is just a page. (it was never there)

But if you want to set items for responsive to occur manualy in several views (x5 does it automaticly for you) Then us the button on top responsive. There you can set how object behave under certain viewports.

Just another tip: If you press F1 in x5, you get the help file on the subject you are in. Use it! The help file in x5 is very good. Also check there the best practise guide.

Here in answers there are also guides, check menu in the footer for them.

Also nice from a user:

These will be very helpfull when you need to start.

Thanks, Andre.  I might be missing something there now, but I was able to switch between the different variants in the Page Creation section because I was changing cells on each page under the different variants.  Then it was gone.  I wasn't doing that in the Responsive Settings page, though the option to change variants was the same in both places.

I had been going through the help file.  It is quite good, but I still seem to be having some problems.

And thanks for the link to the post with the video tutorials, I'll be going through those.  For now, I just went back and recreated that website mentioned above in one of my other responsive builders.  But since I purchased X5 I do plan to keep playing with it to see if I can get a handle on it.  I like to have options.

Right now it seems that X5 is more tedious and complicated than my other builders, but with some time and practice I'm sure it will get easier to use...

Terry, when you return to WX5, create a new post. If responsive pages are still an issue, let us know and we'll give you a blow by blow description of what to do and why to fill in any gaps left by the videos or manual. Same for other issues.

Appreciate it, Esahc.  I've been thinking about (and will be) rebuilding some older client websites, but I just talked to a potential new client today and will be meeting with them this week to talk about a website.  That will be a good chance to start from scratch on one with X5.

I've never been much on using templates, and have always preferred to design sites from scratch, but I think I'll try using an X5 template for practice.  Along with the video tutorials and manual.

And when I come back with more questions, I'll start a new post.  People here have been very friendly and helpful, always a good sign.  I'll be back in a week or two with updates on progress and probably more questions...

One last thing.  When I posted above yesterday I realized as soon as I posted that I misspelled Andre's name, but apparently you can't edit a post here.  Sorry about that, Andre...

No Problem at all, and i can correct it if needed, but I don't adjust posts from others unless they ask or write about it.

For know I corrected it.

And as Esahc mentioned, you are very welcome here.

And for what it's worth I also start from scratch, also with templates, this way I know what is where and what does what....